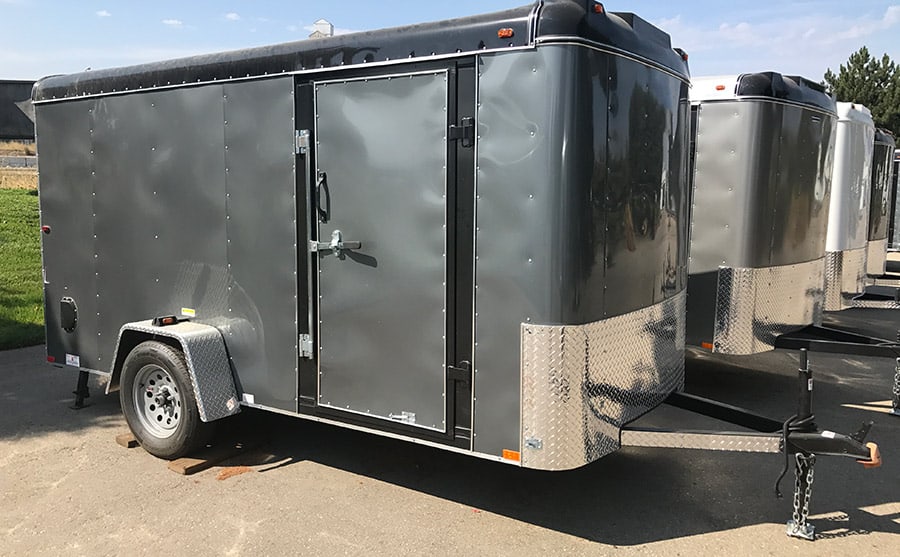 This is a 6x12' enclosed trailer for dirt bikes.[/caption] I have spent the last few weeks researching dirt bike trailers.  As I looked through Craigslist, I couldn't help but notice the high number of postings from people who bought a trailer that same week and were selling it because it didn't fit their number of dirt bikes/atvs, or it didn't fit in the space next to their house, etc.  That's a lot of lost money, so hopefully, this post can help you make the right decision the first time. In the end, I decided to buy a 6x12' dirt bike trailer for my family.  We need 4 dirt bikes right now (me, my wife, and two boys) and we'll eventually have another dirt rider when my little girl (now 1-year-old) starts to ride.  Given that some of the bikes are smaller kids bikes, a 6x12 easily fits what we need if we load the bikes diagonally.  You could also fit 5 adult bikes in that space, but it would obviously be tighter. In this post, I'm assuming that you're purchasing an enclosed trailer for your dirt bikes.  For me, that's far more convenient because you can store your gear without worrying about it blowing off the trailer, the bikes can rest against the sides for extra support, and you don't have to unload them when you get home.  If you're using an open trailer, you may actually need a slightly larger space because of the need for tie downs reaching out front and back since you may not have a solid side rail to lean up against.

You can fit two dirt bikes in a simple 5' x 8' trailer.  In this case, you'd load the bikes vertically (running the length of the trailer).  An adult-size 450cc dirt bike is usually about 3' wide (including the handlebars) and 7' long.  As long as you stagger the handlebars just slightly, this is a comfortable fit without worrying the bikes will contact each other during the drive. Most people won't buy a trailer for two dirt bikes because they can also fit in the back of a truck quite easily.  You can even fit two full-size dirt bikes in a short bed truck if you put the tailgate down and hang them off the back a bit.  But if you have a car or SUV, or you're just like me and you don't like loading them up into a truck and tying them down, then a 5'x8' will do the job.

It's possible to fit 3 full-size dirt bikes in a 5x8' trailer, but it is quite a squeeze to get in there and try to tie them down.  You have to fit them vertically (running the length of the trailer), and it's just generally not very fun. A better fit for three dirt bikes is a 6x10' trailer.  At that size, you can load them vertically, or a better option is to go diagonally.  This gives you a little more room to walk around and fit them in. A 6x12' trailer is another option for 3 bikes.  With this size, you will be very comfortable and can load them just about any way you want. [caption id="attachment_472" align="aligncenter" width="950"] 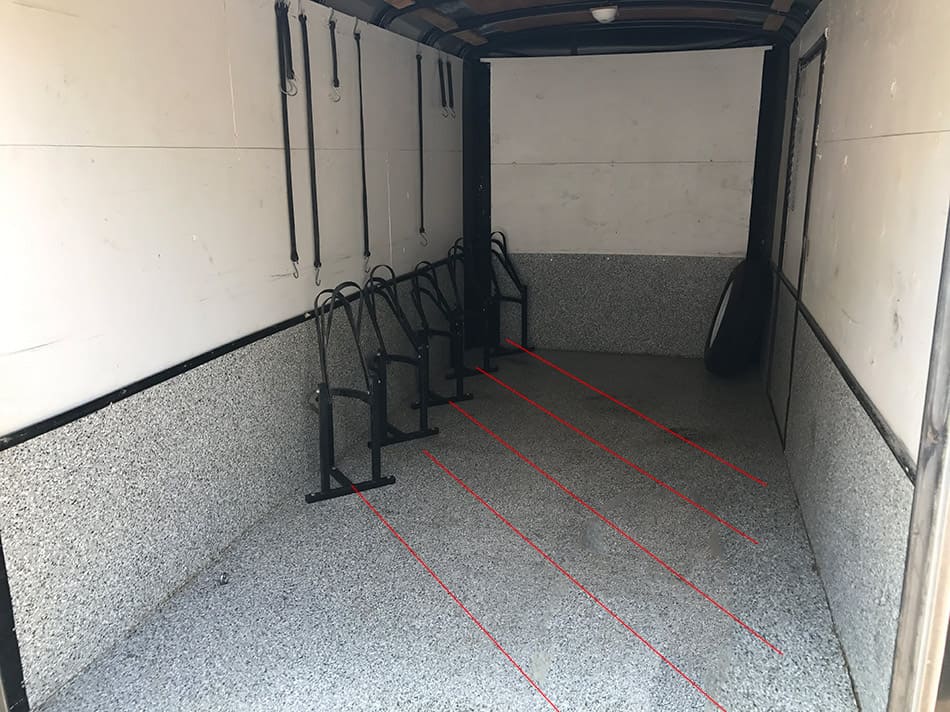 This is how you can load 5 full-size dirt bikes into a 6x12' trailer. You can use wheel chocks in the front to secure the tire, and then for good measure put a simple tie down or even a rubber strap to push the bike into the chock if the road gets bouncy. The red lines show where the bikes go.[/caption]

For this number of dirt bikes, I feel confident recommending a 6x12' trailer or larger.  I can confirm for certain that 5 full-size dirt bikes DO fit in a 6x12' trailer, but you have to load them diagonally, and the last bike will barely squeeze into the spot by the door.  5 full size dirt bikes in a 6x12 trailer is a VERY tight fit.  With 4 bikes, a 6x12 is a roomy fit. If you have 5 bikes, you can start to fit a lot more if you go wider than a standard 6' trailer.  Moving up to a 7', 7.5', or even an 8' wide trailer allows you to fit many more bikes because you don't have to put them in at as steep of an angle.  This didn't work for me, though, because I wanted to fit my trailer beside my house and there wasn't that much room since I live in a subdivision. I chose a 6x12' trailer because that's all that will fit easily beside my house since I live in a subdivision.  We have two full-size bikes for my wife and me, and then smaller bikes for the kids.  We have a 50cc bike for my 6-year-old, and a 110cc bike for my 8-year-old.  We'll eventually move those kids up and our daughter (only 1-year-old now) will move up to the 50cc.  So I wanted a trailer that can fit 5 bikes. [caption id="attachment_471" align="aligncenter" width="900"] 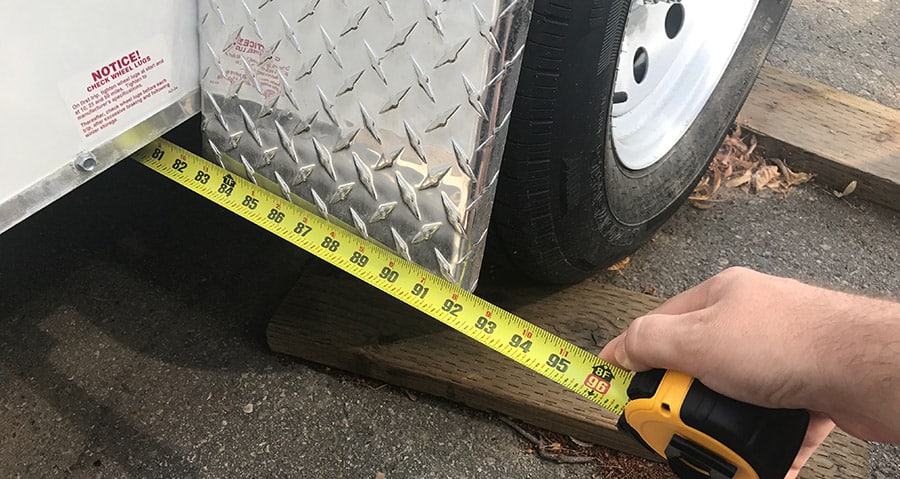 How Wide/Long Can Your Storage Spot Handle?

Keep in mind that the dimensions advertised for enclosed trailers are usually pretty close to the INTERIOR dimensions of the box.  Each manufacturer does this differently, but I measured 4 different enclosed trailers today from 3 different manufacturers, and in each case the interior dimensions were close to what was advertised. The exterior dimensions are a few inches wider in width for the box, but keep in mind you have tires and fenders on the sides as well.  So if you plan on putting your trailer in a garage bay, beside the house, or in a storage facility, be sure to bring a measuring tape and actually measure the width of the trailer from fender to fender.  I nearly bought a 7' wide trailer for my bikes until I caught my error. The same is true of the length.  The trailers I measured today were about the right length as advertised for the box interior, but from bumper to hitch it was about 3.5' longer.  So if you buy a 6x12' trailer, you'll need a spot that can fit about 92" wide x 187" long. [caption id="attachment_506" align="aligncenter" width="900"] 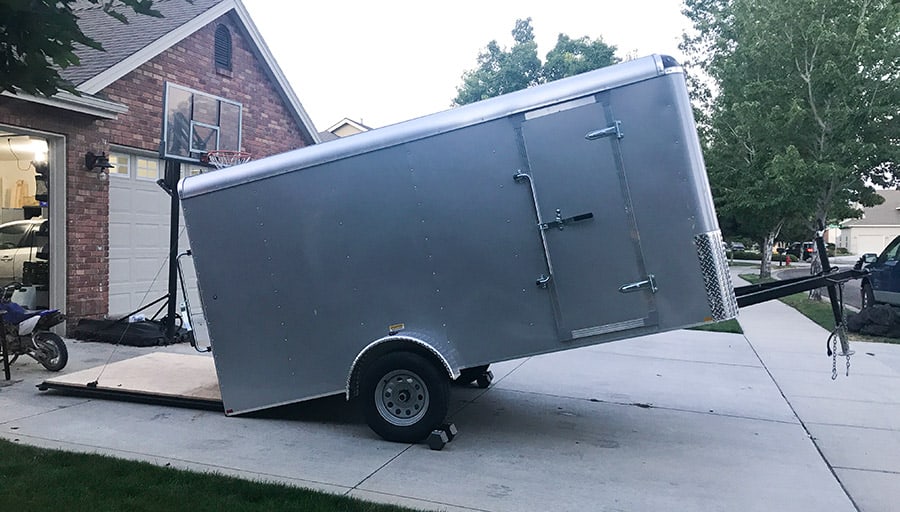 Not my brightest moment. With a single axle trailer, you have to worry much more about balancing the weight if you aren't connected to the truck.[/caption]

Dirt bikes will do fine on a single axle trailer.  Most axles are rated for 3,500 pounds.  A heavy 250cc 4-stroke like a TTR-250 weighs about 260 pounds dry.  So even if you have 5 dirt bikes all loaded with gas, you're only at 1,500 pounds.  Even including the weight of the trailer and protective gear, you should be fine. Some people say that tandem axle trailers tow straighter.  I personally haven't noticed this to be true, but that may be something to consider.  It basically just means you have to buy four tires instead of just two each time they wear out.  I prefer single axle for my dirt bike trailer. One drawback to single axle trailers is that they are tippy if you don't have it connected to the truck.  My first day with our trailer, my wife and I were in the back sweeping it out when all of the sudden the entire front flipped up into the air.  Duh.

Features to Look For

Those are just a few things to look for when comparing trailers and trying to understand the quality differences.

I just wanted to leave an example of what you might expect in terms of pricing.  I went and looked today at several stores around Meridian, Idaho where I live.  For a 6x12' dirt bike trailer, I found prices between $2,700 and $4,300 for a new trailer depending on features.  For me, I found a good one for $3,045 that I felt is of good quality for the price.